Quick note: I recently wrapped up a writing coach arrangement with Ari Lewis, host of the Mastering the Attention Economy podcast. We really enjoyed working together (see Ari’s ROI here), and he proposed I take on a newsletter editing challenge.

The challenge: Twenty newsletter edits by September 22, the first day of autumn 2020. In paired blocks below, you’ll find the original (in italics) and my edit.

My primary goal: increase signal through noise reduction, and boost authority through clarity, concision, and cadence.

Notes on the Crises, July 23

The key challenge for v. 3: Nathan sets out to explain in non-specialized terms where profit comes from. He works through production costs, depreciation, etc., and does a fine job bringing the non-economists along. I clarified points and cut generously, including a paragraph of digression about the Levy Economics Institute at Bard College. Below you’ll find the first 1000 words of this 2100-word piece.

Below, the original appears in quotestyle, and my edit appears below that. I’ve preserved the images, too, to support Nathan’s explanation, which is quite smart.

Where do profits come from?

A Guide to the Kalecki-Levy Profits Equation

Periodically, an interaction on Twitter reminds me that it is worthwhile to make implicit knowledge among my colleagues explicit. There are important points which are well established among the economic policy analysts I regularly speak to which still need articulating to the new, much wider, audience that I now have. A couple weeks ago, that reminder came in the form of a twitter interaction with Gaurav Saroliya, the Director of Global Macro Strategy for the large economics forecaster “Oxford Economics”. In reply to another tweet by me, Gaurav argued that government budget deficits had the potential to lower corporate profits. They would achieve this outcome by requiring households to save more, thus presumably lowering household spending, and thus profits.

Every field has its own specialized vocabulary that its practitioners use to move quickly from “where we are now” to “where I’d like us to go.” When economists (like me) present before an audience of non-economists, though, we have a duty to render implicit knowledge explicit, so that others may follow along. For many readers, that jargon is simply noise, and it obfuscates the signal. If we seek to be understood, we need to communicate with clarity.

I argued that this reasoning was based on an accounting error. After a very brief twitter interaction, in which I cited the Jerome Levy forecasting center publication “Where do Profits Come From?”, Gaurav gracefully and publicly issued a correction. For those mercifully unfamiliar with that website, this is almost unheard of on Twitter.

I countered by suggesting that Saroliya’s claim was based on an accounting error. I proceeded to remind him of the Kalecki-Levy Profits equation. Straight away, Gaurav issued a correction. For those of you mercifully unfamiliar with Twitter, acts of contrition are almost unheard of. 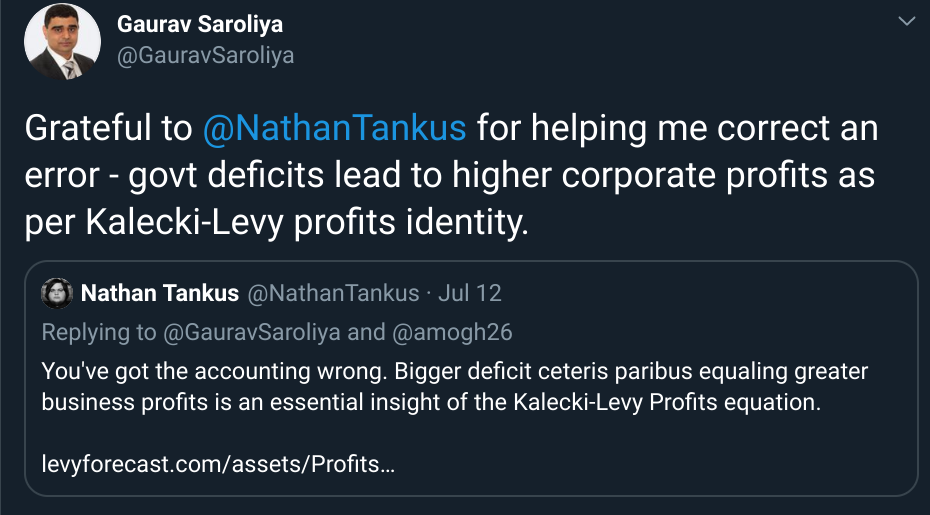 Still, the interaction stuck with me. It stuck with me because it reminded me just how easy it is to make the mistake Gaurav made. In fact, most readers are probably still unsure why what Gaurav said was wrong. Without having the right framework to think through these problems, very smart people say things about aggregate profits and deficit spending which are inconsistent with macroeconomic accounting. So today, I’m going to be explaining one of the most important accounting statements in macroeconomics- the Kalecki-Levy profits equation.

This interaction stuck with me, for it reminded me just how easy it is to make this sort of mistake. In fact, I figure a fair number of you might still not know why Gaurav’s position is wrong. Without the right framework, brilliant people say things about aggregate profits and deficit spending that contradict the basic principles of macroeconomic accounting. Today, my aim is to unpack one of the most important models in macroeconomics: the Kalecki-Levy profits equation.

Where Do Profits Come From?

If you’re very interested in the topic of today’s article and want to know more, I highly recommend reading The Levy Institute’s publication “Where do Profits Come From?” I’ll be reposting a few of their great illustrations to make these accounting relations feel more real.

To learn more about today’s topic, check out  “Where do Profits Come From?” (The Levy Institute). Below I include a few of their great illustrations to bring these accounting relations to life.

By way of background, it is worth saying something about the two men the equation is named after. Michal Kalecki was a Polish economist, who came to the analysis of macroeconomic accounting presented here by reading volume 2 of Marx’s Capital. Kalecki is known as a contemporary of Keynes, who came to many of the same ideas independently. Despite being his contemporary, today Kalecki is considered a foundational “Post-Keynesian” economist. By contrast, Jerome Levy was an American businessman who derived the profits equation independently, in pursuit of the knowledge of where his own profits were coming from.

For many, it is of interest that two men of such differing political views came to such a similar analytical framework. The relationship between Kalecki and Levy embedded in the Kalecki-Levy profits equation continues to this day in the form of the Levy Economics Institute at Bard College, where Hyman Minsky spent the last years of his life. (Minsky relied on the Kalecki-Levy profits equation in developing his own financial analysis of capitalism, work which I will return to another time).

(Note: I deleted this paragraph below, since I considered it to be too digressive for an essay of this complexity.)

So what actually is the Kalecki-Levy profits equation? It’s simply an accounting statement that, in strictly an accounting sense, “explains” where total nominal profits come from, financially.

A word on Kalecki and Levy: Polish economist Michal Kalecki came to these insights of macroeconomic via Marx’s Capital, v. 2. Kalecki nad Keynes, who were contemporaries, came to many of the same ideas independently. Still, Kalecki is now regarded as a foundational “Post-Keynesian” economist. By contrast, Jerome Levy was an American businessman, a wholesaler of knitted goods. He, too, derived the profits equation on his own, in pursuit of the knowledge of where his own profits were coming from.

So, what is the Kalecki-Levy profits equation? It’s simply an accounting statement that “explains” the financial source for total nominal profits.

In other words, we’re not talking about what physical inputs in production create value, or whether they do at all. That is a different discussion. One of the most basic lessons in the macroeconomics of accounting is that for every seller there must be a buyer, and for every deficit there must be a surplus. The Kalecki-Levy profits equation puts these lessons to good use to figure out where the surplus businesses receive come from.

In other words, we’re not talking whether the physical inputs (raw materials, labor) of the production process create value. That’s a different question. Our question pertains to two basic lessons in the macroeconomics of accounting: first, for every seller there must be a buyer. Second, for every deficit there must be a surplus. The Kalecki-Levy profits equation applies these lessons to determine how a business generates surplus — a.k.a., surplus value or profit.

That said, the surplus being measured is not a purely financial surplus. Non-financial value also counts towards aggregate profits. This holds because, well, it counts towards individual company profits. Investment Expenditures are not equivalent to firms shedding profits. A company that spends 100 dollars purchasing a machine now has a machine worth 100 dollars — those funds spent are not a loss. Over time the expenditure on that machine will be recognized as a cost, but there won’t be any associated expenditure at that time.

This is the business accounting concept known as depreciation. 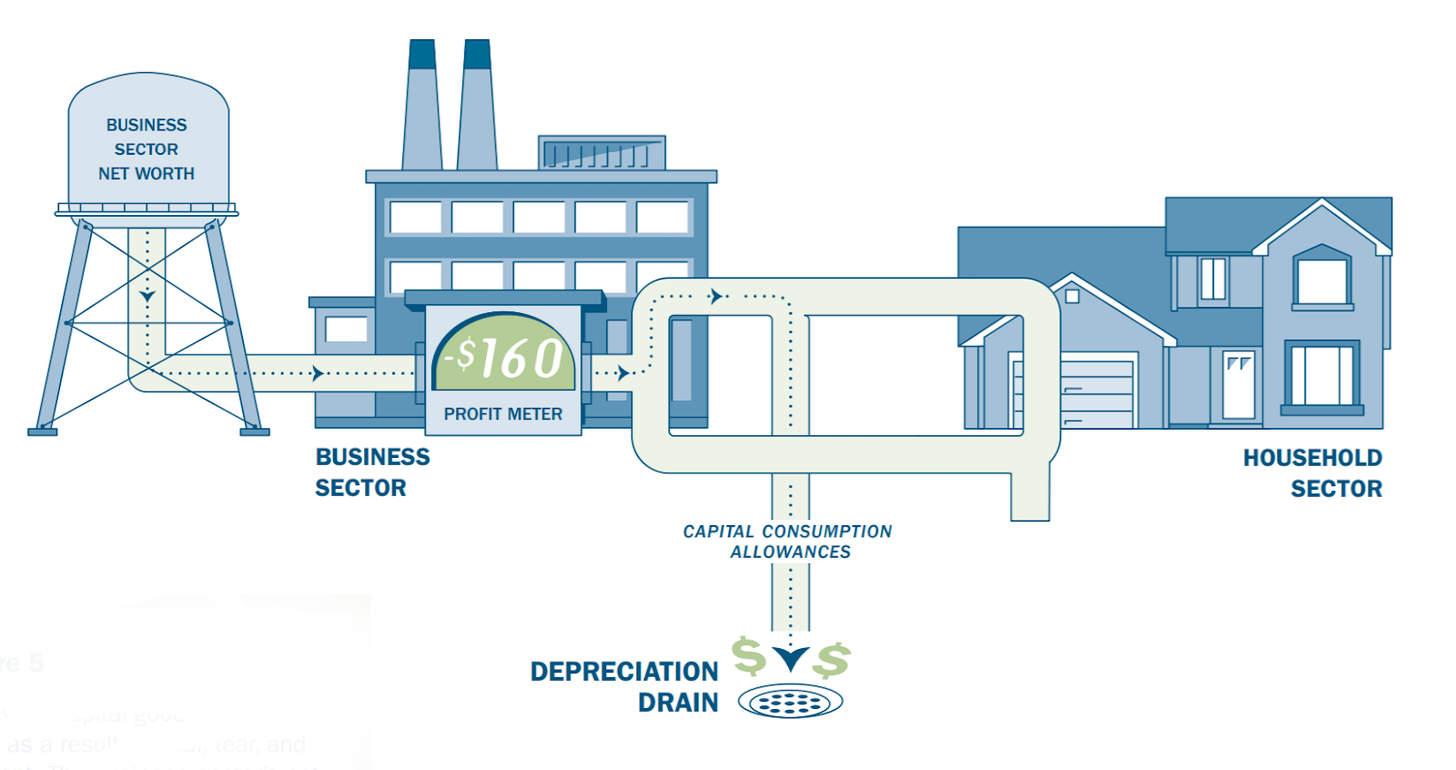 This surplus, though, is not a purely financial surplus. Objects of non-financial value — e.g., management structures and growth potential — also count towards aggregate profits, since they count towards individual company profits. Likewise, investment expenditures are not equivalent to a shedding of profits. A company that spends $100 purchasing a machine now has a machine worth $100. This purchase is not counted as a loss. At that time, it’s not regarded as an expenditure and, over time, it’s recognized as a business cost.

In accounting, the acquisition and use of this machine is regarded as depreciation.

The upshot of all this is that before you add governments, foreign sectors and household saving, the basic source of measured profits for the business sector is the business’s own investment expenditures.

So here’s the upshot: in the business sector — before you add governments, foreign sectors, and household savings — the basic source of measured profits is the business’s own investment expenditures.

Labor, raw materials, and rent are official costs. Investment expenditures are not. So, if those funds end up back in the business sector, they are likely to increase profits. (We’ll examine how likely in a moment). For many economists, this fundamental accounting relation drives their focus on private investment. Subsequently, they believe that private investment itself drives the economy. In general, an expenditure that generates revenue without increasing expenses increases profits. Private investment remains distinctive because it’s an expenditure under direct control of the individual firm.

Investment = Profits: Or do they?

Still, sometimes I regret that people learn about this (or John Maynard Keynes’s similar accounting relation investment=saving) before learning other elements of macroeconomic accounting. Investment expenditures only increase the net-worth of the private sector because the investment goods being created or purchased have monetary value. Put simply: the financial net-worth of the private sector doesn’t change because of private investment. It seems to me that explaining aggregate financial profits would be a more important starting point. In other words, identifying flows that can increase the business’s sector’s financial net-worth. This would allow us to disentangle learning macroeconomics, from learning individual business accounting.

Let me suggest a more fruitful starting point: aggregate financial profits. In other words, let’s identify flows that can increase the business sector’s financial net worth. This move allows us to disentangle the lessons of macroeconomics from the lessons of individual business accounting. Consider, then, another column on the books that represents the flow of revenue, but not the ebb of expenses: dividends.

Dividends are based on measured profits and considered a “distribution” of profits. As such, dividends flow out without being treated as expense. But they could possibly finance a purchase from a business, thus creating business revenue. Of course, many dividends flow into the accounts of institutional investors who aren’t going to increase their expenditures (or payouts to households) because their current measured income has increased so in practice only a small portion of dividends flow back to businesses in the form of sales. We’ll tackle this question more when we get to households. It’s important to emphasize that neither of these flows can increase the financial net-worth of the business sector. So at this point, financial profits are still zero.

Dividends are based on measured profits and considered a “distribution” of profits. As such, dividends flow out, but are not tallied as an expense. They can be used, though, to finance a purchase and, in turn, create revenue. Of course, many dividends flow into the accounts of institutional investors. While their current measured income has increased, these investors do not automatically increase their expenditures — i.e., payouts to households. Only a small portion of dividends flow back to businesses in the form of sales. Let’s tackle this question below in our discussion of households. In the meantime, note that neither of these flows increases the financial net worth of the business sector. At this point, financial profits remain zero …

And that’s a wrap!

If you like what you see, and you want to talk about writing and coaching, reach me over here. Thanks! Happy writing!

Living the good life in NE Ohio. I dig science and the written word. Let's build something amazing together. View more posts